Everyone of the fans, how are you?
I am Junsu.
On 12th August as FC MEN, I will be coming to Tokyo.
I will not be meeting you for a while as FC MEN, though it is lonely I will work really hard this time!
Please come to cheer me!

Note: Junsu has previously visited the Dr Kotani beauty clinic before as well.

JYJ Junsu sama (T/N: honorific for respect) visited the store in the break while on tour!
We are awaiting your visit again!
#Junsu #aesthetic #hairremoval

Helloo… This is Junsu. It has become that currently I am seperating as Fcmen in Japan. Without fail come see my last appearance in uniform okay. Will be waiting at Ajinomoto Stadium〜

Full of can not sneak away from XIA’s fatal charms! Began at a certain tree garden that day’s pictorial photoshoot
Today Junsu’s condition is? The best! On the way to the shoot place! Junsu [who found] the tropical rainforest like tree garden was really unusual. Without a rest break in interjection acquired the nickname ‘uwa fairy’! At that time pulled Junsu’s gaze cockatoo,
Junsu: Anyeong? what is your name?
Cockatoo 1,2: (silence no reply) Junsu: Become friends with me! come here~ (acting friendly)
Cockatoo 1,2: (silence no reply)(immobile stance)
Junsu who was XIAmoried by the cockatoo again at the shoot location… 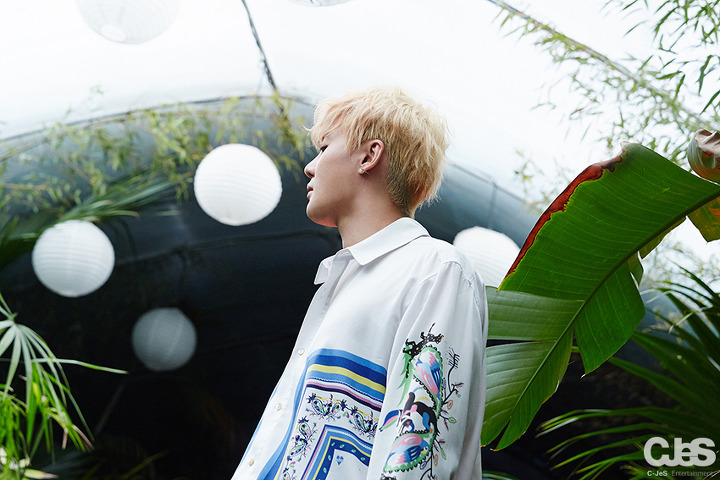 To call a handsome atmosphere is something like this!
Subliming the sadness of the XIAmory transforming to seems to be vain Junsu While exuding meong mung beauty like this (T/N: charms like a puppy who you want to pat) passionately working Fairy nim…! Holy visual that reminds you of a water bearer 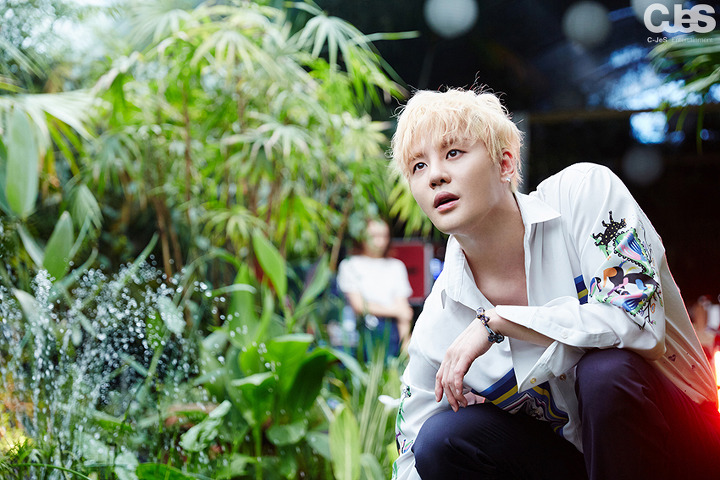 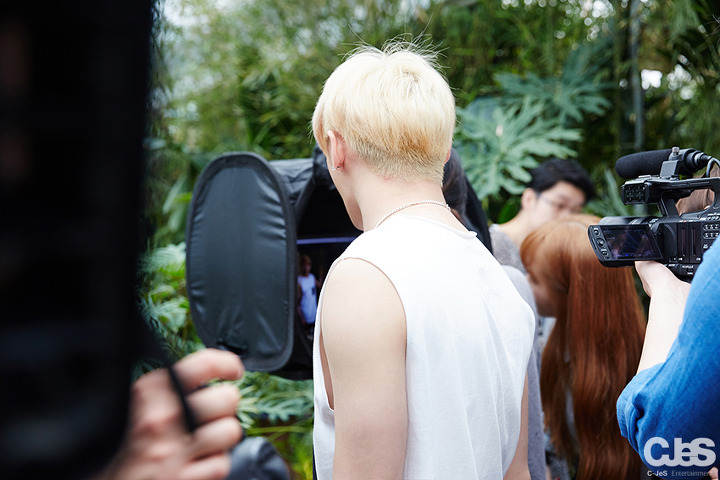 Changed the atmosphere, this time enters with a power visual~
His behind figure that invites a back hug ( ͡° ͜ʖ ͡°) heu mutt.. 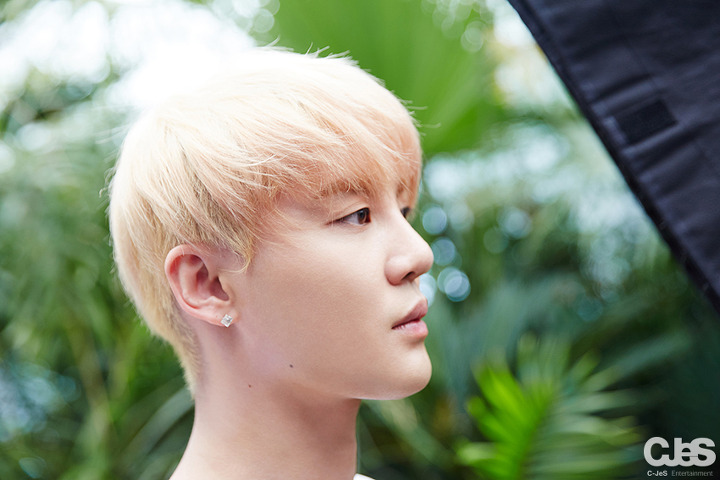 Wasteful for just me to see staring rumours here and there
the perfect profile….! 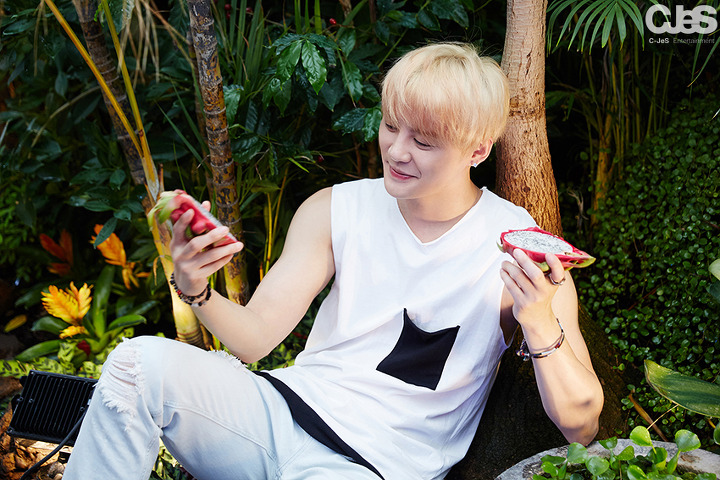 This time’s photoshoot prop dragon fruit looking at the hole
“What is dragon fruit [called] in Chinese? by the way is this the real thing?” 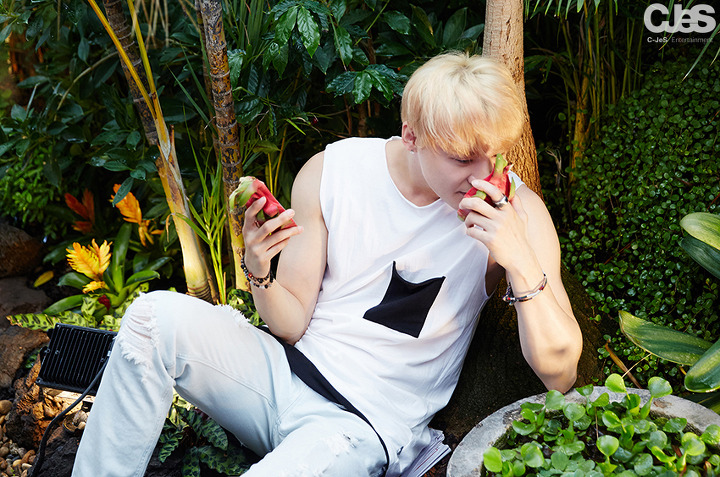 In order to judge the dragon fruit Junsu’s definite sense of smell insertion! 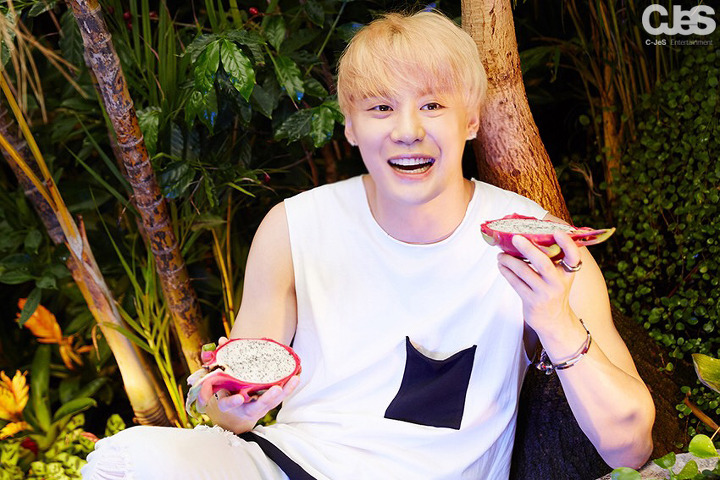 Sense of smell was insufficient or till the taste mobilised, his deduction is!?
“Un~ Tasty! it’s sweet”
oo jjoo jjoo~ was the dragon fruit that tasty?(T/N: oo jjoo jjoo means ‘you are very adorable and I want to take care of you.’ via open slang) 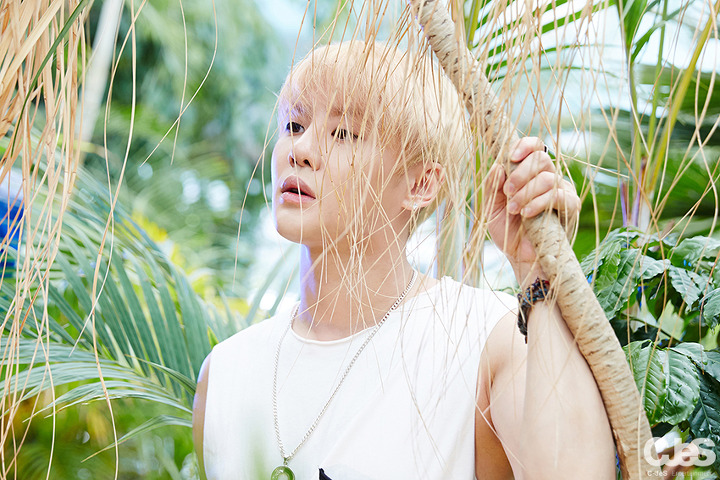 Continuing photoshoot~
In between the lush green grass till the refreshing youthful beauty…!!
Everyone is your heart okay?

This time’s pictorial is certainly perfect. (Thumbs up) 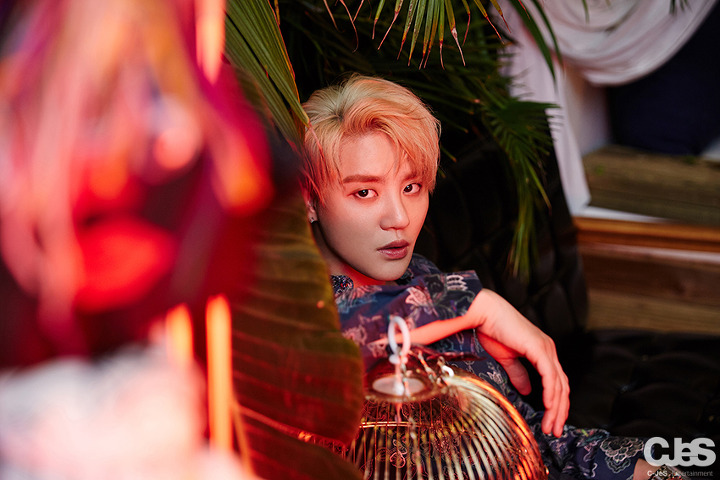 No… are you the same person as before?
Can feel Kim Junsu’s difference in temperature with just one [photo] 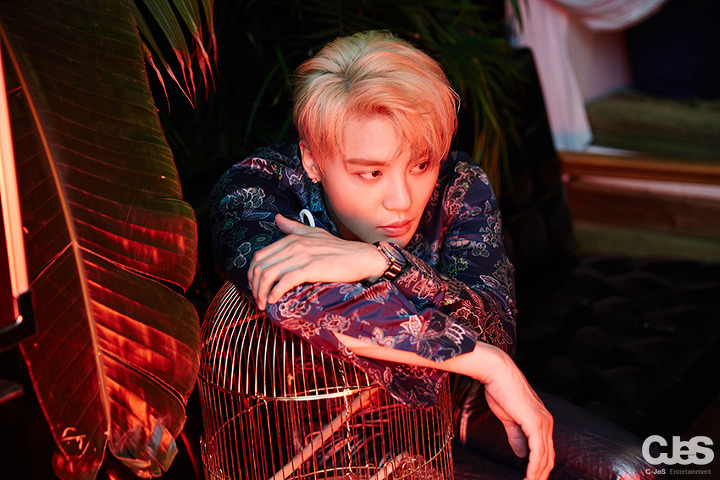 Following the deep red lighting sexy and feast of provocation…♡ 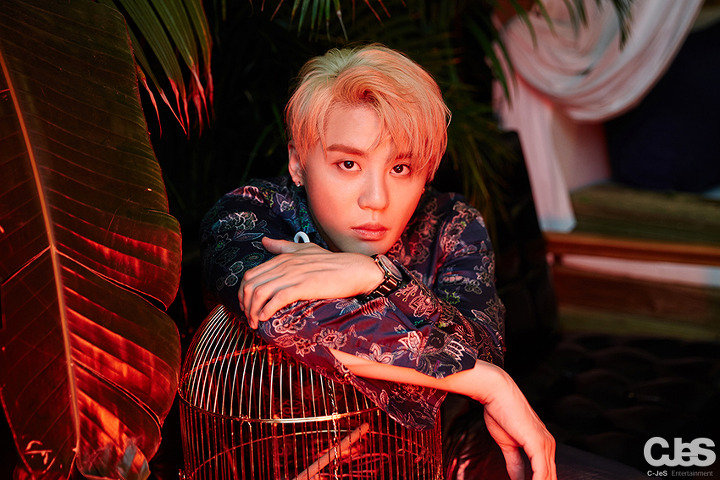 In the even even an eye contact!
kyun… (T/N: chest tightening) It was a really beautiful life…. (쥬금)

Everyone till here the pictorial photoshoot location’s behind
did you enjoy it?
In the end of the behind because there is the A cut person merely! 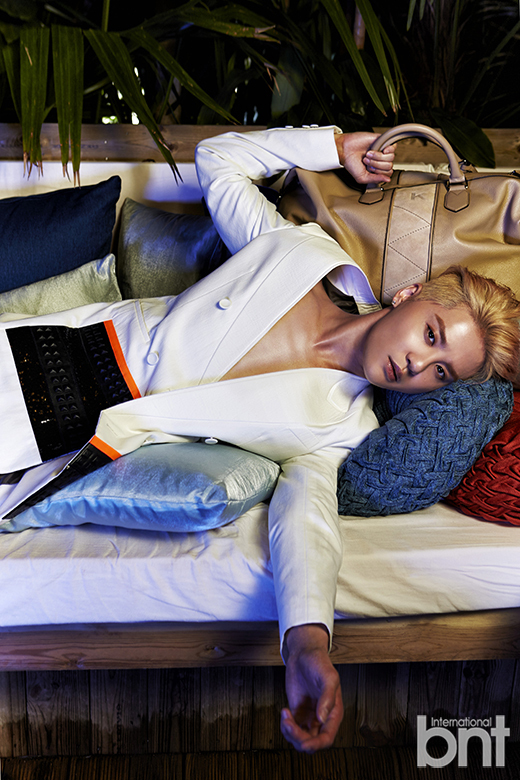 If he was a evil spirited sexy boy 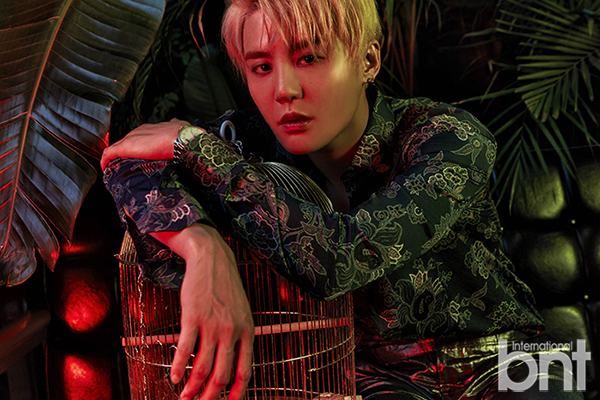 Born to be celebrity Kim Junsu!

Everyone self protecting this time’s 1boon!

Returned from Yokohama but wanting to return back right away, I am Staff T.. From tomorrow on the sales of tickets in advance for 3 films will commence. Was asked from various places which rank will sell? and am getting excited. Everyone is your preparations to buy the tickets in advance at Cinemart Shinsaibashi okaa~y? \(//∇//)\

(T/N: in JYJ concert in Japan Yoochun says “are your preparations to have fun okaaay”, i believe the last sentence references to that)

Yucho-fan san please kindly take care of me. Now for sure… To have that power concentrated… (Praying) to have it become a Hit. (Yucho-fan is correct right?) If returning from Yokohama, Osaka is till Shinsaibashi. Those who didn’t go till Shinsaibashi. Other side of the clear file it is clearly photographed. (Thought is small)

Pacifico Yokohama 7 p.m. start Stage is near! Sound is good!
There is [selling of] tickets on the day, people who make it certainly(^｡^)
#Junsu #xia

Note: There may be some discrepancies in the translations.

Just Yesterday!
That moment when you and Kim Junsu faced each other!
Aren’t you curious about that hot place?

That. is. why!
Filled with ambition, prepared Kim Junsu’s fan sign meeting A to Z!
Everyone are your perparations done keep up ?ㅎㅎ

Before the fan sign meeting Kim Junsu is
as expected what was he doing?

In order to convey everyone a ♥thump thump♥ video
He is enthusiastically taking a self video right!

Will meet in a bit～

Today as well surely boasting meott bbeum (T/N: cool and pretty) Kim Junsu!
now to even talk about saying how splendid he is
mouth is in a hurting condition!!!!!!!

Today as well exploded in the so called coolness Kim Junsu!
365 days splendid Kim Junsu is
saying that he met really special people!

Before the beginning of the actual sign meeting!
Today as well without mistaking an eye contact with the camera
making cuteness captain Jun jjang!

Discovered the self camera and
Like this like this personally the camera’s position
adjusting it Kim Junsu! keu eu～ certainly he’s a pro!

While doing that quickly greeted the fans once!
It is still before the fan sign meeting start and might be nervous
like dispirited showed a smile Kim Junsu!
Jun jjang can not communicate>_<?

Now the time to meet the fans!
Other than the selected fans in actuality numerous people
came to the fan sign location!

Really getting closer! Junsu’s expression kindness!
Met the fans and harmoniously
the state of the fan sign meeting under progress!

Came together with the mother child fan enters as well!

At this time!!!!!!!
To oppose ‘MC XIAwar’ showed up
Filled with hip hop Feel fan has entered!

To the form of the fan who performed her own written rap
laughed hard Kim Junsu!!!
The atmosphere of the venue became much more hotter

The form of everyone viewed with Kim Junsu’s gaze!
To about the throbbing hearts of everyone
Jun jjang’s back form as well looks like totally throbbing!

Putting a check on the post its given by the fans as well～
Diligently signing as well
Before one knows the fans sign meeting has entered it’s halfway!

In then middle of the fan sign meeting for a short while in order to communicate with the fans
Held a mike Kim Junsu!

“I believe it’s the first time to hold a fansign meeting at Coex～
not in a concert, the seat opened it’s been a long time,
right now like that can you see without any constrain?
still enjoyably there is a feeling of liveliness
though it’s short it would be nice if it became a good time～
Thank you very muchㅎㅎㅎㅎ”

To the fans who came to the fan sign meeting
did not forget the greetings of thanks Kim Junsu!

At this time entered Squirrel!!!!♥
As it’s too cute, revealing a solo photo of the squirrel fan!

Kim Junsu too automatically wears a father’s smile!
with a gaze dropping honey towards the squirrel fan
looking form captured!!!

Though it was really hot,
baby squirrel had many hardships! o geu o geu～ (T/N: o geu o geu means ‘you are very adorable and I want to take care of you.’ via open slang)
(It is said that Coex is the workplace… praying that it does not come out till the endㅎㅎ)

The costume of Kim Junsu’s 1st Full Album ‘Tarantallegra’
a fan who wore and come in the end
the Fan sign meeting ended in the midst of success!

At this time’s fan sign meeting that progressed for about 2 hours
many of the domestic and international fans came!
Everyone Thank you very much～～>_-

Proof shot of a cute heart with everyone of the fans!

Special meeting with Kim Junsu!
Everyone did you spend a happy day～?

Thanks to everyone, was really happy～
Love you! Heart pyong pyong!!♥

It’s not a miracle
Because it’s Junsu

Will continue to support forever

(T/N: during Yokohama concert Junsu said that it’s a miracle that he is standing on stage like this)

My Tweets
xiaoverflower
Blog at WordPress.com.